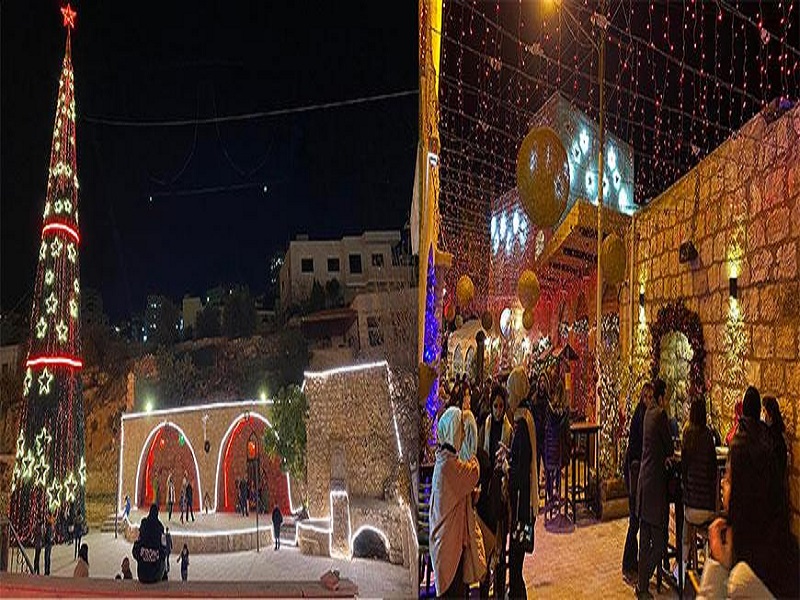 Hometown of the largest Christmas tree in Jordan, and famous for its 19th century churches, Fuheis, welcomes Christmas with bright decorations in December.

Al Balqa Alley in Fuheis, also locally known as the Old Town, features many sellers behind stalls, selling winter snacks, such as roasted chestnuts and grilled corn, along with different types of warm drinks.

Santa Claus is parading the streets with his helpers with some Christmas tunes with their bells, drums and bagpipes.

Christian expatriates have managed to feel “closer to home” in Fuheis,  some 12km west of Amman, as Kris Beery, who is spending her first Christmas in Jordan with her family, told The Jordan Times.

Nawal Diek and her daughter Nichole Shahin, who are spending this Christmas in mourning over the loss of loved ones, have also noted how “homely” the Christmas air in Fuheis is; “We came from Amman, hoping to catch some of the Christmas joy in Fuheis, and try its famous roasted chestnuts from the street stalls,” Shahin said.

Despite the various ceremonies of festivities, the pandemic still left no room for one of the town’s famous Christmas traditions.

Santa won’t be making his usual gift-giving trip around the neighbourhood in Fuheis, according to Rami Salman, a volunteer from the Greek Orthodox Church in Fuheis, who dresses up as Santa every year.

“Before the pandemic, whoever wanted to give his neighbour, friend, or brother a gift would give it to us with the delivery address,” Salman told The Jordan Times, noting that some of the locals would also leave an amount of money for volunteers to buy gifts for children.

The volunteers then divide themselves into teams to distribute the gifts, each with a Santa and a group of helpers, announcing his arrival with musical instruments, he added.

“Some also give us money in exchange for our trouble, which we later use to pay tuition fees for students in need,” Salman said, adding that this year’s tour will be limited to children from needy families.

“Our reward is the joy we feel when we put a smile on the face of a child who didn’t expect to get anything for Christmas,” he added, noting that “Christmas is about rebirth and the renewal of hope”.

Even though Santa won’t be making an appearance in all houses this year, Father Romanos Samawi, the vicar of the Greek Orthodox Church in Fuheis, noted that “the spirit of giving” is never absent in Fuheis during Christmas.

“The ‘hand in hand’ campaign was launched in all Greek Orthodox schools in Jordan; students donated what they can afford of essential food supplies,  then we used to make food parcels and distribute them to needy families,” he said.

“We use this time to instill in our children a culture of giving,” Father Romanos added.

All churches in Fuheis also take part in various charity campaigns; many organise bazaars, to sell items at discounted prices and give the profits to families in need, he said, noting that December has always been a month of “mercy”.